Earlier this week, I received an email that I have been waiting four months to receive.  This long awaited email was from Fitbit and it was my 30 pound weight loss badge. Fitbit awards users various types of badges for accomplishing different things: number of steps in a day, total steps since joining, flights of stairs climbed, and total weight loss.  I’m very proud of this accomplishment. I have stuck with my New Year’s resolution for four months. During that time, I have logged at least 10,000 steps every single day. I have more energy, my blood pressure has greatly improved, and I even started playing hockey in a men’s league.  My health is better thanks to a change in diet and exercise. My Fitbit plays a big part in keeping me motivated with both. My Fitbit has also helped to make me a better principal.

I didn’t notice it right away.  In fact, when I first bought my Fitbit, I thought it would be a pretty useless tool for me.  My daily routine was pretty set, and I was certain I had about 10,000 steps every day. To prove this, I decided to make no lifestyle changes when I first bought the Fitbit.  I was just going to follow my normal week and check the results. As an elementary principal, I am pretty active during the day and assumed I easily would amass 10,000 steps without even thinking about it.  Wrong! I was shocked to see that during my test week my steps per day ranged from 3,238 (Did someone carry me to work? I am pretty sure it’s more steps than that to walk to and from the building.) to 14,730 (Recess soccer with the fifth graders is so much fun).  My average for the week was 8,340 steps.

When I reflected back on the week, I noticed 2 days were really low (3,238 steps and 5,098 steps).  Furthermore, I had 2 days that were pretty high (13,294 steps and 14,730 steps). I thought about my attitude during the week, my stress level on those days, and how much energy I had for family time at the end of the day.  It is probably not surprising that there was a direct correlation between number of steps I took in a day and how I felt at the end of the day. More steps = more energy, less stress, and a better attitude. My Fitbit became a tool for school culture.  I am the leader of the school, and I can’t be the best me if I have low energy, high stress, and a bad attitude.

One feature on my Fitbit that I love is the hourly reminder to get at least 250 steps.  There is no excuse for me, as a principal, to go a full hour without ever talking to a student during the school day.  Reports have to be completed and emails have to be answered, but students are the most important part of my job. That alert on my Fitbit reminds me of that very thing.  Principals have more and more responsibilities every year. Recent surveys show that principals are more stressed than ever and have more demands on their time than ever before.  It is easy to get stuck in my office all day long. My Fitbit helps to remind me how important it is to not let that happen.

Last week was the perfect example of how powerful this simple tool has been for me as a principal.  I was bogged down with state testing paperwork and school improvement surveys. I needed to send letters to incoming families, write a 504 plan, and hadn’t even started writing an evaluation report that was due to the Superintendent.  No way was I getting out of my office but that pesky buzz reminded me that I had been sitting for 50 minutes without taking a single step. Although I almost ignored it, I also can’t deal with a missing red dot on my Fitbit app, so I stood up and headed out of my office.  Get the 250 steps and get back to work on the reports.
Amazing things happen at Hemmeter every day and I can’t ignore them even if I have a mound of reports due.  Outside the office, I started talking to students and visiting classrooms and chatting about books and posting pictures to our Facebook page.  An hour (and 3,300 steps later) I felt recharged. I helped a teacher fix their Promethean Board, watched students present to parents about what they learned during a coding unit, learned from students how to use MicroBits, witnessed the largest Keva block tower I have ever seen, and did an impromptu book talk on Ghost Boys to a student browsing my principal’s bookshelf.  I’m glad I didn’t ignore that Fitbit alert. I would have missed an awful lot sitting in my office. 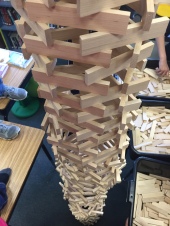