I had the privilege of presenting at the annual Michigan Reading Association (MRA) conference last week with two amazing colleagues: Kelly Hendrick and Nicol Howald. MRA is always a fantastic conference, but this year I was even more excited because one of my favorite authors, Jason Reynolds, was presenting.  I had my copy of Ghost, When I was the Greatest,  All American Boys, and A Long Way Down packed in my suitcase.  When I arrived at the event, I picked up the program and scanned for sessions that Jason was leading.  I was both surprised and disappointed to see that Jason’s only event was guest speaker at the luncheon on day two.  I was even more disappointed when I discovered that luncheon was sold out. I brushed off the disappointment and was ready to make the best of the rest of the conference.  The first day ended up being great. Our group decided to meet up in the hotel restaurant that night to share our learning and reflect on the conference. As we were getting up to leave, a gentleman walked past me.  It took me a second to react, “Nicol, that’s him! That’s Jason Reynolds leaving the restaurant.”

Like two crazy groupies, we took off speed-walking after him through the hotel.  We were still about 50 feet away when he got to the elevator. I was ready to give up. I had resigned that I just wasn’t destined to meet Jason at this conference.  Luckily, Nicol was not willing to accept that fate. She took off sprinting and reached her arm in the elevator just as it was about to close. “You’re Jason Reynolds, right?” she asked.  I am sure he was a bit shocked, but he didn’t immediately sound the alarm on the elevator which was a good sign. Instead he graciously stepped out of the elevator and shook our hands. We spent the next couple of minutes talking about how much we loved his books (No, he would not tell us what happens after A Long Way Down).  We assured him we don’t usually run people down in the hotel lobby, but told him this was probably going to be our only chance to tell him how much we loved his books.  We explained our confusion about him not having any sessions other than the lunch engagement and how we didn’t sign up for it in time. He ended by telling us to just come to the luncheon.  There is always standing room in the back. 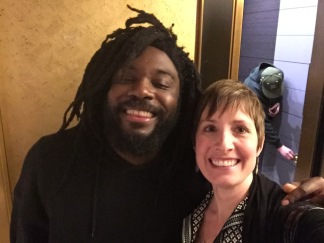 Although they didn’t have food for us, the MRA organizers were gracious enough to let us attend after telling them our Jason Reynolds’ elevator story.  Jason’s speech was as humorous and inspiring as I imagined. One part really stuck with me though. He was telling a story about his mother, a teacher. She taught him to always make decisions based on love.  He shared that she modeled this in her classroom by asking students a simple question when they were misbehaving or  not engaged. She would simply ask the student, “What’s the matter, child?” Mrs. Reynolds knows what all of us know deep down: a misbehaving child is often facing another underlying problem.   Sometimes the most compassionate, most effective, and most obvious thing we can do as educators is simply ask, “What’s the matter, child?”

MRA is always an amazing weekend of learning.  Weekend conferences are great because they don’t require you to be gone from school, but they can also be difficult because you don’t get much downtime before you are right back at it the next week.  The travel and lack of sleep can make for a rough first day back, especially when you start the day by putting out a couple of fires from the previous week. So when a teacher called down to the office for a second time about a student that was being disrespectful, I had run out of patience.  I went down to the classroom and asked the student to come out into the hall. We talked privately and I told him to grab his stuff and we would continue this conversation in the office. I fully intended to suspend this student, send him home and let his parents deal with his attitude for the day.  I had my mind made up as I walked down the hallway. He slouched down in the chair in my office, arms crossed, eyes defiant. I stared at him for a couple of seconds choosing my next words carefully. Although frustration and tiredness were on the tip of my tongue, Jason Reynolds’ mom was whispering in my ear as I asked the boy, “What’s the matter, son?”

We spent the next two hours talking in my office.  Without giving too many personal details, he shared why he was so angry.  He had every right to be. It’s easy to forget the hardships our students are facing each day.  Just like the students in Mrs. Reynolds’ class, he was misbehaving for a reason. He was trying to get attention, any attention he could.  As the conversation continued, I could see the defiance melt away from his eyes. Instead of suspending, I decided to mentor. We now meet every day.  We talk about what is going on in his life, how to better deal with stress and anger, and I try to support his passions. I recognized right away that he loved to draw based on the Dogman comics he had created in his notebook.  I told him it was the best Dogman drawing I had seen. We spent a lot of time talking about the behavior expectations of the school. Being respectful to the teacher was non-negotiable. We brainstormed some ways to better deal with his anger.  He sat down with the teacher and apologized. He explained what he was going to do to better handle the situation in the future. He accepted responsibility for his actions and was back in class.

I could have easily suspended the student.  It may have even led to a change in behavior for a couple of days.  I don’t want to change behavior for a couple of days. I want to change behavior long term.  I want to build a relationship with the student so they want to change their behavior. I believe when we put the child first that we can change the entire trajectory of their life.  I really felt like I had gotten through to the student. I knew I could mentor him and make a difference. I wasn’t naive enough to think that change would be easy or immediate. I knew we would hit bumps in the road.  However, I didn’t expect to see the student and teacher in my office again just two hours later.

“Mr. Bailey, Kevin* has something he wants to tell you.”

“I made this for you,” he said and handed me a brand new Dogman picture he had drawn. 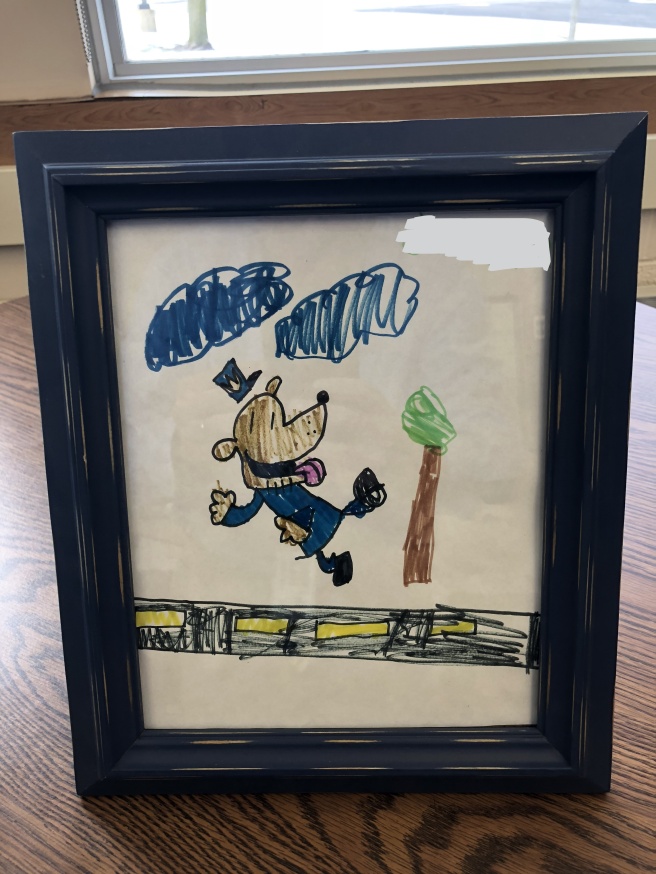 “This is the picture drawn by the amazing artist and Hemmeter student that now sits framed in my office.”

*Not the actual name of the student to protect his privacy.