Unintended consequences can be powerful.  They are probably the best thing about a new project.  You begin with an ending in mind, only to find that some of the best parts are those you never even dreamed of at the beginning of the project.  That’s exactly what happened with The Book Buzz.

This year our entire school decided to participate in Jillian Heise’s #classroombookaday project.  Every classroom would dedicate time everyday to read a picture book aloud to students.  As a staff, we brainstormed books to share, built fun bulletin boards to track our reading, and educated parents about the benefits of this initiative.  I struggled to figure out how I could best participate as the principal of the building.  During the first two weeks of school, I took time to visit each classroom as a guest reader to help promote #classroombookaday.  I told students that I was excited that they were taking time each day to read a picture book and that I planned to read a picture book every day as well.  I even turned my office door into a giant grid where I would add the cover of the book I read each day so the students could see my progress.  Even after all these efforts, it felt like something was missing.  It felt more like I was participating alongside the students than with them.   That’s when the idea for The Book Buzz hatched.

I am always looking for new ways to build relationships with students.  It’s the part that I miss most about being in the classroom.  As a classroom teacher, you spend 8 hours a day with your students.  You know their wishes, their dreams, their fears, and their stories.  As a principal, it’s just not possible to have this same relationship with every student in the school.  However, I have never stopped trying.  My original idea for The Book Buzz was pretty simple.  I would talk to a student each day about a book they enjoyed during #classroombookaday, we would film it, and post it to YouTube.  I didn’t know anything about having a YouTube channel, other than my two boys spent an unbelievable amount of time watching a British guy with cool hair play Minecraft for hours each week.  Although I didn’t totally get it, I knew YouTube was a big deal to kids.

After reaching out to a couple of colleagues and watching several YouTube tutorials on how to create a YouTube channel (none done by any British guys with cool hair), I was ready to begin.  I knew I wanted a short musical opening with pictures to introduce the show each day.  This was really easy to create in imovie.  I snapped a couple pictures from around the school, uploaded them to imovie, added a preloaded theme song, and the intro was complete.  Although this took time initially, it became much easier with each new try as imovie allows you to easily save the intro and add it to another video with one simple click.

For the first episode, I asked the fifth grade teachers to recommend a student that really loved one of the #classroombookaday books that had been shared so far this year.  I made sure I had a copy of the book the student wanted to share, asked them to bring their independent reading book as well, and had the parents sign a permission slip for filming and publishing.  Within 20 minutes, the first episode was up and live for the world to see.

The Book Buzz is not:

The Book Buzz is:

I knew they would think filming a YouTube show was cool and fun.  However, it ended up being so much more.  One of my favorite parts of starting any new project are the unintended consequences, those things that happen by accident that you didn’t plan for or imagine.  Unintended consequences are the cream in the Oreo for me.

My favorite unintended consequence from The Book Buzz is how The Book Buzz became one of my best relationship building tools with students.  I love that I have 20 minutes carved out every day that I spend one-on-one with a different student. We always spend the first 5 minutes just talking, sometimes about books but most of the time just about what is going on in his or her life.  It’s been awesome.  I have also noticed that I am having more meaningful conversations in the hallways, at lunch, or on the playground with the students that film on The Book Buzz.  It has also been a great relationship building tool with parents.  Just about every parent that has had their child film an episode has emailed or called to say how excited their child was to film the episode and that they appreciated their child being given the opportunity.

I knew The Book Buzz was going to have a positive effect on the reading culture in our building.  However, I completely underestimated the effect.  I never imagined that students would subscribe to the channel and watch the videos that didn’t feature themselves. I always ask the kids before filming if they have ever watched an episode of The Book Buzz and almost every student has responded, “Yes.  I watch them every day when I get home.”  I was amazed to hear how many teachers were showing the episodes in class as a book talk for a book they wanted to “bless” in their classroom.

The final unintended consequence from The Book Buzz and probably the most important was how it gave students a chance to shine simply by being themselves.  They were so excited to share their episode with family, friends, and other students.  I knew The Book Buzz was a success when I overheard a conversation in the hallway:

“I loved your Book Buzz video.  It was so good.  I think it is going to go viral.”

The featured student had the biggest smile on her face and replied,

You can watch an episode of The Book Buzz by clicking on the picture below: 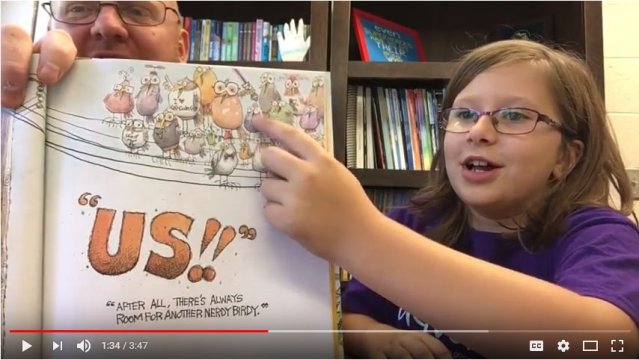 If you would like to start a similar project in your building, please feel free to email jcbailey@stcs.org.  I am happy to answer any questions or share any materials I have created for the project.

One thought on “The Book Buzz: Promoting a Reading Culture by Letting Students Shine”